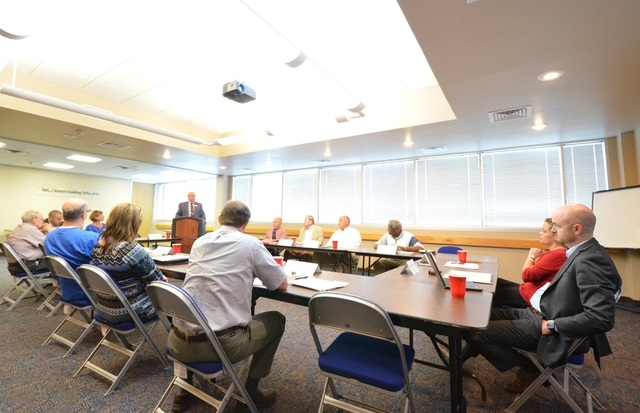 Deputy Executive Director Randy McBroom provides orientation for the three new members of the Texoma Council of Governments governing board during the board meeting Thursday evening. (Alex Maxwell / Herald Democrat)

The Governing Board of the Texoma Council of Governments established three new advisory subcommittees and welcomed three new members to the board at its meeting Thursday evening.

“I think a healthy COG works best when it has good involvement and understanding by the board,” Brinkley said. “I think that is something that is needed in every organization like this, and it is something that without it doesn’t do anybody any good.”

The three subcommittees would consult during outside regular meeting times and report back to the board with recommendations on board actions. Brinkley said the subcommittees cannot take independent action, but they help increase involvement by digging deeper than what the board can typically do in its monthly meetings.

“I know it is within my authority as president to essentially create these committees, but I think it’s better to bring it before the board for a discussion — to get board input before creating these,” Brinkley said.

The executive committee is made up of the board president, vice president and the secretary treasurer with two ex-officio members — the executive director and the deputy director. As part of its responsibilities, this committee will maintain the bylaws, and its members could attend other committee meetings, but Brinkley said they would not be voting members of those subcommittees. Brinkley, with Sherman council member Tammy Johnson and Fannin County Judge Creta “Spanky” Carter would serve on the subcommittee with Executive Director Susan Thomas and Deputy Executive Director Randy McBroom.

The audit and finance advisory committee has three members from the board representing each county and two ex-officio members — the executive director and the finance director. The human resources committee also has three members appointed and three ex-officio members, which are the deputy human resources director, staff liaison and a staff representative, who could not be the executive director.

Brinkley told the board there is not a limit to how often these committees will meet, but the executive committee would probably meet monthly. The audit and finance committee would meet more often during budget planning time — January, February and March — and during the typical auditing months of June, July and August.

“I think this is something we need to strongly consider,” Brinkley said. “If it helps us do our jobs as board members better, which in turn would hopefully help the staff do their jobs better.”

Brinkley named Grayson County Commissioner Jeff Whitmire, Gainesville Council Member Keith Clegg and the Rev. Cecil Jones to the audit and finance advisory committee. Denison council member Teresa Adams, North Central Texas College representative Karla Metzler and Bonham council member Bob Thomas will serve on the human resources advisory committee. At its meeting last month, the board approved a motion that at least three staff members would meet with the board subcommittee of Brinkley, Whitmire and Carter to work together on changes to the personnel policy manual to propose to the board. Thomas noted the human resources committee would serve in place of the subcommittee established last month, which Brinkley clarified.

“We’ve been working on the employee personnel manual, and we did establish a committee to go back and continue to review that and work with staff,” Brinkley said. “This will be in lieu of that. I think that is a good starting point with what the previous committee has worked on. They will take that and run with it as they see fit and report back to the board.”

Three new members were sworn in at the beginning of the meeting and at the end, the TCOG department directors gave a brief overview of the operations of which TCOG is involved.