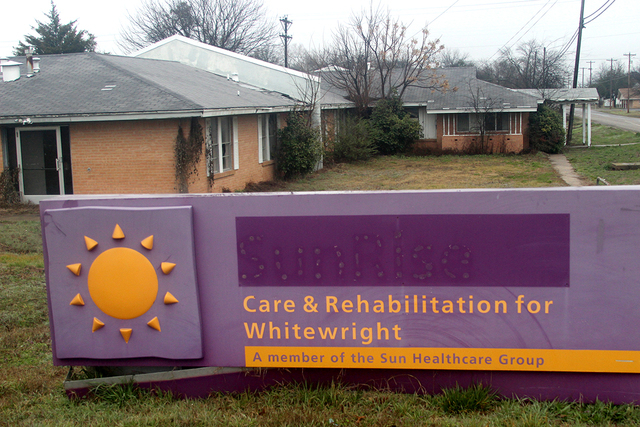 NATE STRAUCH/HERALD DEMOCRAT The abandoned SunRise Nursing Home building in Whitewright is one of several locations in the city that will benefit from a six-figure EPA grant. The money will be used to reclaim environmentally hazardous property and improve community health. - See more at: http://heralddemocrat.com/news/local/whitewright-snags-epa-grant-help-clean-downtown#sthash.p5s6mcl1.dpuf

WHITEWRIGHT — Driving through downtown Whitewright, “blight” is not a word that jumps to mind. Between the rejuvenated Odeum Theater, a bustling pizza joint, numerous antique stores and construction on the new Grayson Hills Winery building, Main Street in Whitewright is, in many ways, emblematic of the historic renewal movement in downtowns across the country.

But several other buildings — structures the eye tends to skip over — remain troublesome for local leaders. There’s the sprawling, abandoned SunRise Nursing Home abutting the town’s park and playground, for instance. And behind the restoration work on Main, a former sausage factory takes up nearly an entire block of prime real estate.

But this growing city of 1,600 received a six-figure shot-in-the-arm this week that could help accelerate the city’s modernization. The Environmental Protection Agency on Monday awarded Whitewright a brownfields grant in the amount of $200,000 to help remediate dangerous structures and bring additional benefits to the community.

“We’ve been working with them since mid-Summer, trying to revitalize our downtown area,” said Whitewright Mayor Allen West. “This was a nationwide application (process) — anywhere from 100 to 1,000 applications — they only do 20, and we got one of them. It’s a very big deal.”

The grant funds were secured thanks to a partnership among the city, the local school district, both area colleges, local economic development organizations and, notably, the grant writing experts at the Texoma Council of Governments. Randy McBroom, who runs TCOG’s Planning & Developing Department, said that spirit of mutual assistance likely helped Whitewright stand-out in the crowded field of applicants.

“This was a highly competitive grant, so we were just so pleased they received it,” said McBroom. “We’ve been working with the city of Whitewright, along with our consultant, to help them develop a vision plan for the city, and (the grant) sort of grew out of that. One thing I know (helped the application) is the partnerships that are going to be involved in it. It was the one thing that showed them Whitewright was really serious about doing something.”

“It was kind of a surprise that we got this all of a sudden,” added West. “This was our first time (applying), so it’s … been kind of overwhelming to us.”

The money is being awarded as part of the EPA’s Area-Wide Planning Grant program, which “empowers states, communities, and other stakeholders to work together to prevent, assess, safely clean up, and sustainably reuse brownfields,” according to the organization. Brownfields are defined as areas with potential hazardous structures containing lead-based paint or asbestos, or land damaged by past industrial or commercial activity.

The area included in the grant consists of 54 acres surrounding downtown, focusing specifically on industrial sites near Main Street. Several Whitewright buildings have already been identified as likely beneficiaries of the grant money, including the aforementioned nursing home and sausage factory.

Information provided by the Chicago-based environmental firm the city retained for help with the grant process outlined how the money would additionally help find solutions for linking the city’s central business district with its green spaces and educational institutions.

“This study will examine multiple vacant and underutilized areas for reuse potential,” said Eric Neagu, a representative with Weaver Consultants Group. “We will examine impacts and opportunities relative to economic development of Whitewright’s downtown, an area with considerable potential, as well as how to provide safe pedestrian and bicycle routes from our schools and parks through this area.”

The time frame for the grant period is two years, said West, meaning the project should wrap-up by early 2017. By that point, city leaders hope to have accomplished much to further improve Whitewright’s ascendant downtown.

“More than anything else, the goal is to improve the quality of life of the people of Whitewright through planning,” said McBroom. “It’s the idea of just improving the life and the environmental health of the residents who receive these grants.”