A Debt of Gratitude 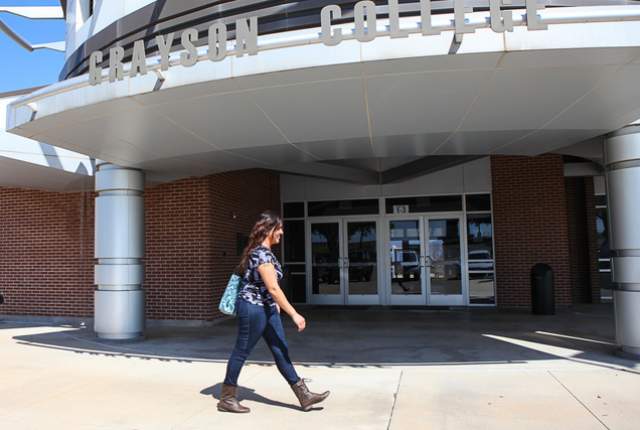 BONHAM — When Yazmin Villanueva enrolled in the Helping Our People Excel GED Program, she found the door open to the classroom that would lead her to a future career.

A mother and wife at 17 years old, Villanueva dropped out of school to support her family and moved to Bonham where her husband’s job was located.

“You feel like it’s the best choice when you’re trying to help your significant other with the finances and everything,” she said. “It was really hard because you want to keep going but there’s something that stops you from achieving that.”

In 2013, Villanueva, then 23, decided she wanted to find out information about how to earn her GED. She visited Bonham Independent School District where she was directed to the HOPE GED program under the Texoma Council of Governments. Several agencies serving on the Fannin Literacy Council have partnered to give community members the opportunity to take free GED classes in Bonham and Honey Grove since 2004.

“We make it as easy as possible for the people,” TCOG Social Services Coordinator Lou Ann Taylor said. “It’s really the best of both worlds because you are working at the computer at your own pace, but you have a teacher there who can help you every step of the way.”

You could feel that they cared. They were always encouraging me.

The HOPE GED program utilizes the AZTEC learning software, which allows students to work on an individual time-frame. Classes are three-hour blocks where students are able to study math, English, social studies and science. Because students are working on the computer, they are not required to be in class all three hours.

“We always encourage them to come as much as possible because statistically it’s proven that the more they attend, the faster they’ll get their GED,” Taylor said. “We understand that people have jobs and families and work commitments so it’s not always possible to be here when the doors are open.”

Villanueva said it was nerve-racking to start school again. She said she asked herself: “What if I’m too old? What if I can’t remember anything I learned back in those days? What if it takes me a long time to remember and the pass the test?”

Lead GED instructor Juanita Lance had only praise for Villanueva. Lance said Villanueva was a diligent student, who was in the classroom every time the door was open.

“When she first came, she was very timid, quiet and unsure of herself,” Lance said. “She was in a new city and she wasn’t familiar with the people here but she knew she wanted to get the GED.”

Once she gained more confidence, Villanueva was determined to get her GED and apply for nursing school at Grayson College. Lance said she saw her student mature quickly over the two months she worked with Villanueva.

“We try to work with the students and the needs they have,” Lance said. “I usually focus on what are their weak areas so we can work on them first. After they accomplish those areas, we can brush up on the areas they already know.”

Villanueva walked into the classroom thinking she didn’t like math and found herself solving problems quickly. With the help of Lance, math become one of Villanueva’s favorite subjects and it would be put to good use when she would attend college.

“You could feel that they cared. They were always encouraging me,” Villanueva said. “Their best advice was to believe in yourself and that you can do it.”

After two months of taking GED classes in Bonham, Villanueva passed her GED exam. She was one of 28 students recognized for earning a GED certification through HOPE GED program in 2013. Every year, the program holds a commencement ceremony with cap and gown to celebrate the students’ success.

With Fannin County at a 15 percent illiteracy rate, former County Judge Derrell Hall and Adult Community Supervision and Corrections Director Hal Fowler approached TCOG in 2004. A need was identified to open a literacy program for Fannin County citizens, which has now blossomed into a GED program that has helped more than 120 graduates.

Since Taylor has been with the HOPE GED program, she has seen more people joining the program to get their GED because more jobs require a high school diploma or GED than did not before.

Although Villanueva had completed her time in the GED classroom, Lance was not finished helping her former student in life. Lance and her husband took Villanueva to visit Grayson College where she could talk to a counselor about the nursing program.

“I felt a big change in myself because I didn’t want to stop there,” Villanueva said.

Today, you can find Villanueva on campus of Grayson College where she is on track to graduate in spring of 2016. She credits her husband and daughter, now 9 years old, as her biggest supporters.

Villanueva said her husband was very supportive about her attending the GED program but he thought it was to improve her job opportunities rather than to start a career. She said she is very thankful he works hard to take care of the children when she is in school as well as pay for all the expenses of their family.

“He’s been a big support and he told me: ‘If you’re going to college, you’re going to finish college,'” she said. “He’s enjoying it as much as I am as far as my achievements and everything.”

Villanueva’s daughter has been her biggest motivation and going to school has brought them even closer together.

“What I liked the most was that my daughter was really excited,” she said. “It encourages her to want to go to school. Now that she sees me going to school and going into nursing, she’s thinking of a career for herself too.”

Villanueva said she would like to work in a psychiatric hospital to assist doctors and help patients one day. With a job in the nursing field, she hopes to help her husband pay the bills and give her children everything they need.

The best advice she said she has to give to other community members thinking of going back to school to earn their GED is: “To go for it, because it really changes your lifestyle. You’re going to feel better about yourself and not regret that you should of went.”